So you’ve discovered the sublime flavor of Turkish coffee cooked in an ibrik with a hint of cardamom. But where to get actual Turkish coffee beans from Turkey? 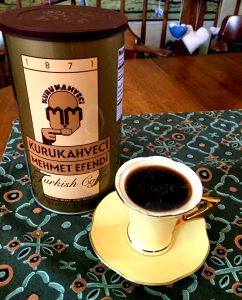 Look what I found in a local Arab market? My husband and I noticed a little Arab food market and decided to check it out. I got a can of real Turkish Coffee made in Istanbul – these Turkish coffee beans come finely ground. At the market they also had broken pieces of sugar – both white and yellow saffron sugar. They were like irregularly-shaped sugar cubes. The grocer said in some Arabian countries people like to place one of these on their tongue and keep it there while they sip their unsweetened black coffee or tea. Others put a cube directly into their coffee or tea cup, like the English do.

I came home and immediately made Turkish coffee with my ground beans from Istanbul in my ibrik. It was very good, but very strong – almost too strong for me, and I’m used to strong. Also, the flavor wasn’t as smooth as I prefer. It is super-fine ground with a strong, dark, smokey flavor, similar to the slightly burnt-coffee taste you find in Starbucks shots. Because it is so strong I prefer this one with a little cream.

If you want to try this or other Turkish coffee, ground or whole, and don’t have a local Arab market, you can order several kinds right from Amazon or other online shops. Amazon carries this brand I tried, Kurikahveci Mehmet Efendi Turkish Coffee. They also offer several other brands, some with the ground cardamom already in the grounds.

When it comes down to it, any beans grown in Arabic regions would be perfectly authentic for Turkish coffee. I contend, having made many cups from all regions and brands of coffee, that Turkish coffee is delicious made with any coffee beans. Everyone has their own preference and taste, so I encourage experimentation – which are your favorite coffee beans in making Turkish coffee?

Also, grinding coffee beans fresh right before brewing is always best. But you can use pre-ground or grind enough for a week at a time and store in a jar in a cool, dark cupboard.

I believe the magic is in the method of preparing Turkish Coffee. Using an ibrik is fun and inexpensive, but if you don’t have one you can follow my instructions in this post: How to Make Turkish Coffee without an Ibrik

Turkish coffee is traditionally made in a shallow pot filled with sand. But we can use the ibrik right on our stove top:

Which is your favorite?

Did you use Turkish coffee beans or other beans? Freshly ground or pre-ground? Which spices? Leave your comments and pictures below! 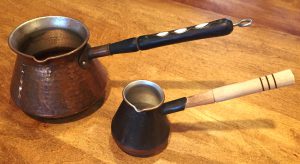